What's New
A FOCUS on Mission
Must Patience Be So Slow?
Harold Jantz: A Heart for the Mennonite Story
Lorlie Barkman: A Life of Creative Engagement
Last Days, First Days
Women in Ministry: Bertha Dyck
January Moment in Prayer “Holy Spirit—Fill Us!”
The Church as the Patient Body of Christ
Advent: Making Much of Jesus: Christmas Day
Advent: Making Much of Jesus: Fourth Advent
Home News Displaced, yet reaching out to others

Displaced, yet reaching out to others 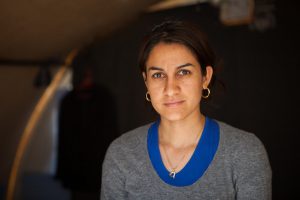 Feryal (last name not used for security reasons) connects with displaced families by sharing her own story of being uprooted from home. (MCC Photo/Matthew Sawatzky)

By the time Feryal arrived at a camp for displaced people in Iraq’s northern Ninewa governorate, she had little desire to leave the security of the tent she shared with her parents and sister.

And for the first four months, she mostly stayed put.

“I didn’t like to talk to anyone, just be silent,” recalls the 22-year-old, whose last name is not used for security reasons.

The months before had been harrowing.

Fleeing the Islamic State group, which killed her uncle, she and her family were among the thousands trapped on Sinjar mountain without shelter in August 2014. 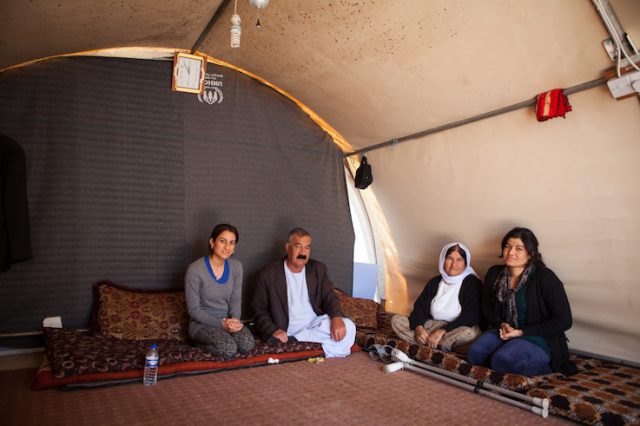 Feryal, left, her parents Elyas and Fatima and her sister Jandar (last names not used for security reasons) fled from the Islamic State group in 2014 and still live in a tent in a camp for displaced people in northern Ninewa governorate, Iraq. (MCC Photo/Matthew Sawatzky)

Her father Elyas, who has only one leg, weeps when asked about the ordeal. He walked on crutches for hours, but could go no farther than the mountain. He stayed there as his family made the journey to safety via Syria and the Kurdistan Region of Iraq. Elyas was one of the lucky few who were airlifted to safety, but his hands bled from using his crutches to reach the peak of the mountain with the last of his strength, and he needed hospital care in order to recover from his exhaustion.

Today, this story that cast such a shadow over Feryal’s life is part of what she brings to other displaced families.

Through a project of MCC and Iraqi partner Azidi Solidarity and Fraternity League (ASFL), Feryal and other young volunteers are being trained and empowered to meet with displaced people to share and document stories of both trauma and resilience. 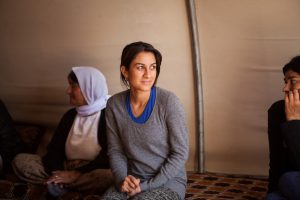 Feryal (last name not used for security reasons) talks about her efforts to encourage displaced families by sharing her own story of being uprooted from home. With her is her mother Fatima and her sister Jandar.

Visits have several aims. In a place where people’s lives have been split by violence, sharing stories builds understanding among people and groups, helping avoid future conflicts. People see the horrors they experienced are shared by others from similar and different backgrounds and have the opportunity to talk together about how they are facing the future.

Feryal and other volunteers, trained to help link the people they visit with services available to displaced families, target their visits to those who are struggling the most.

As these youth reach out to others, they are documenting the atrocities that happened during displacement, especially to religious and ethnic minority groups like Yazidis, Christians and others.

But they also are taking on leadership roles to help heal and reshape their communities – learning that takes root even though almost every other aspect of their lives remains disrupted.

Take Feryal. She had always wanted to go to college, but by the time she graduated from high school, extremist groups had enough power that it wasn’t considered safe to send girls to Mosul to study. Instead she remained at home, and her schedule was soon dominated by the routine of work. “I didn’t have enough time to support anyone in need,” she remembered.

Now, even as she and her family remain in tents, unable to return home, she is exploring how she can make a difference in the broader community and make the stories of displacement known. “We will listen to all the voices of the families in the camps, and all the world will listen to our voices,” she said.

That means entering into the pain of families. She begins visits by sharing that she too fled home, surviving on the mountain with little food or water.

“They recognize we are IDPs (internally displaced people) as well,” she said. “It feels like a visit from the next tent just for talking.”

Then she listens as they open up about the horrors they’ve seen – the Islamic State group killing family members, children dying due to the harsh conditions as families fled and the girls who were taken and not heard from again. She’s talked with girls who were kidnapped by the Islamic State group, witnessing executions and suffering horrors of rape and abuse before escaping.

It’s changed the way she looks at her own situation and the displaced people around her.

“I don’t have one family. I have two families. This is my family,” she says, sitting in the tent with her father as her mother and sister come and go. “And the community is my family.”

Today, Feryal devotes free time to keeping up with the people she’s met – sending and receiving texts on her cell phone, checking in with them on Facebook or stopping by the tents of those who live in the camp.

The 22-year-old, who once didn’t want to leave the security of her tent, is now serving as a team leader with ASFL, encouraging and training a new set of volunteers as they visit with families from March through September.

And as she does, she continues to share the truth she found through her own story of being uprooted: “This is not the end of life.”

“We have to live our lives,” she encourages young people and their families. “We are youth, like 22 years, we have many years. We have to live it and support the people.” 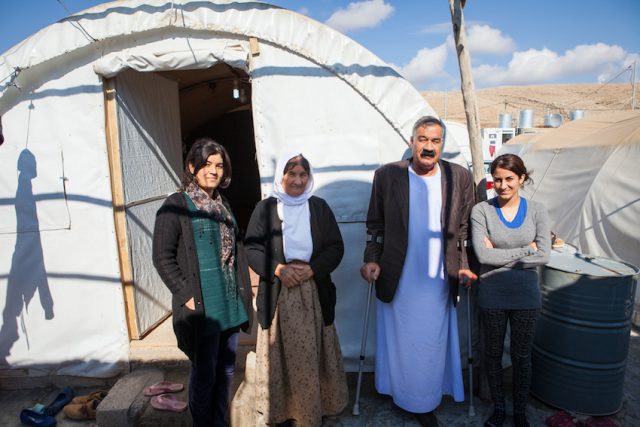 Feryal, right, now leads a team of young volunteers sharing their own stories about being displaced with other displaced families in Iraq’s northern Ninewa governorate. She, along with her parents Fatima and Elyas and her sister Jandar, live in this camp for displaced people after fleeing from the Islamic State group. (MCC Photo/Matthew Sawatzky)