What's New
Delete or not to delete, that is the...
Believers bring water for drought baptism
Encouragement to those in the arena
Keeping attention and making an impact: A few...
Open hands to reconciliation
From the editor
Approaching truth and reconciliation with love in our...
MB Seminary offers new MA in Transformational Leadership...
Multiply August Ukraine Updates
Book Review of Return Stroke: Essays & Memoir...
Home MB HeraldColumns Dancing around the issue

Dancing around the issue

It was Monday morning, June 10, 1996. I filed into the room with a variety of other leaders to participate in the first Canadian ReFocusing Leaders Network. Several Mennonite Brethren national staff had experienced the ReFocusing process and felt it would be a good program to introduce to provincial leaders. As a provincial conference minister, I was invited for training. The material caught my attention, so I flew to Winnipeg to attend the event; I had no idea this equipping workshop would be life transforming.

“Effective leadership flows out of who you are,” facilitator Terry Walling began. The first lesson he taught affirmed my gifting; the second held up a mirror to my flaws.

As I went through the ReFocusing process, it became clear God had prepared me, through many experiences, to serve as a conference minister. That day, God’s calling on my life became evident to me and has never left me.

However, another area of life transformation began – and continues to this day. Through this process, I learned to dance face-to-face with forgiveness. 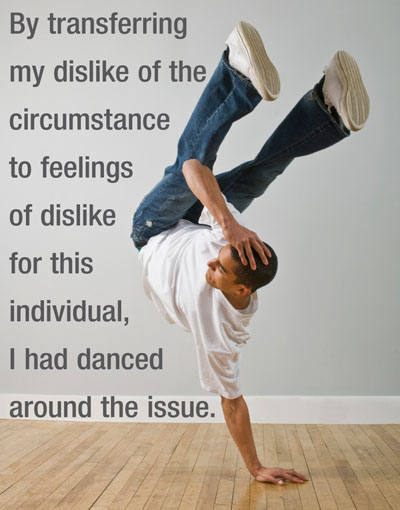 Terry divided us into small groups and assigned a national leader as our coach for the duration of the week. Well, there was one leader with whom I did not want to work. I can picture God smiling from heaven as he orchestrated details so that very person would be my coach. It looked like it was going to be a long week!

I sensed God telling me I was a person with an unforgiving heart toward my coach. How could I be an effective leader with such an attitude? How could I learn anything that week if I didn’t make it right?

When I sat down at the table, it became clear to me that the offence I felt my colleague had committed was no longer the problem for me – he had become the issue! By transferring my dislike of the circumstance to feelings of dislike for this individual, I had danced around the issue. I had no right to talk to him about the original issue until I cleared my attitude toward him. I was the one who needed to ask for forgiveness.

By now, you may be curious as to what the issue was and who the offender was. The national MB youth conference, Banff ’95, had taken place that winter. It was the year of a highly controversial New Year’s dance. David Wiebe, national Christian education director, was the perpetrator of what I considered a seriously flawed judgment call; now, this man was to be my coach!

That day I learned that, all too often, I transfer my feelings for the offence to the offender. The offence becomes magnified and I become a slave to the person who committed the offence.

Thankfully, God revealed this to me at the beginning of the week. By God’s grace, I found the strength to speak to David about what was in my heart. He graciously offered his forgiveness, and the issue soon danced into the sunset, making room for more important things to be discussed and accomplished.

The Bible gives an account of this principle. Ironically, this extreme illustration involves another David who became offensive to a fellow leader. We read in 1 Samuel 18 of Saul’s jealousy toward David because of a great victory in battle. From that day, we read, “Saul kept a jealous eye on David.” Saul danced around his own potential by hating his top warrior.

Have I learned my lesson? I’m still on the journey and expect that the journey will continue until I take my last breath. I must constantly refocus.

I love David Wiebe and enjoyed working closely with him while he was CCMBC executive director, but I’m sure glad that, through forgiveness, I was freed from being his slave!