What's New
Volunteers in B.C. honour Leamington woman tragically killed...
Delete or not to delete, that is the...
Believers bring water for drought baptism
Encouragement to those in the arena
Keeping attention and making an impact: A few...
Open hands to reconciliation
From the editor
Approaching truth and reconciliation with love in our...
MB Seminary offers new MA in Transformational Leadership...
Multiply August Ukraine Updates
Home Arts & Culture Concert celebrates Christmas with carol contest

The Bakerview MB Church, Abbotsford, B.C., member organizes and directs an annual Christmas concert with Songs, Strings, and Steps, a 12-year-old community of 150 local performers who sing, dance, or play an instrument. Their Christmas program is more than a concert for the ears: each event also involves visual spectacle (dancers, decorations, costumed actors), aromas (pre-concert food and drink in the lobby), and audience participation, “so that it becomes a cathartic experience that truly moves the heart,” says Dyck.

“Each year, we ask ourselves how to create something unique for the audience,” he says. Themes have included world music, Old English carols; this year, it’s new compositions. 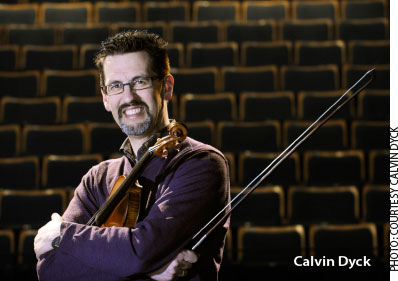 After advertising his call for new Christmas compositions in Christian magazines (including the MB Herald) and music schools, Dyck received 30 entries from across North America, from professional and amateur composers ranging broadly in age.

Holda Fast (member of the Worship Together task force), retired Columbia Bible College choir conductor Rudy Baerg; and Dyck evaluated submissions, selecting eight finalists to be performed and voted on at the event. Songs had to be composed for voices, and celebrate the birth of Christ (not generic winter sentiments).

“We looked at lyrics and music,” says Dyck. “Was the text appropriate? The music well crafted? Did the carol ‘appeal’ to us?”

Each audience member will receive a ballot to select the top entry in each category (choral, contemporary band style, or solo). Winners, announced at the end of the final performance, will be awarded more than $1,000.

Twenty years ago, most churches put on a Christmas production; today most lack the resources. Songs, Strings, and Steps advertises widely in the community, and its popularity increases each year. This year, they’ll do four shows in 1,100-seat Central Heights (MB) Church, Abbotsford.

“There’s a hunger in the community – in church and beyond – to go to something like this,” says Dyck.

“It’s a safe place to introduce unchurched people to the Christmas story.” Dyck doesn’t preach, but every performance includes a unique presentation of the Christmas story and closes with Dyck’s wish that the audience will find “the love and hope and peace of Christmas this season.” It’s a “soft-sell,” he says, but “we would like the concert to be something the public would be comfortable coming to – and also hear the message of Christmas.”

“I’m loath to predict the success of songs,” Dyck says, but “it’s been really fun to put this tougher, to make it happen the way the composers intended. Time will tell if any of these are up to the level of ‘Silent Night.’”

To be performed at: