What's New
A FOCUS on Mission
Must Patience Be So Slow?
Harold Jantz: A Heart for the Mennonite Story
Lorlie Barkman: A Life of Creative Engagement
Last Days, First Days
Women in Ministry: Bertha Dyck
January Moment in Prayer “Holy Spirit—Fill Us!”
The Church as the Patient Body of Christ
Advent: Making Much of Jesus: Christmas Day
Advent: Making Much of Jesus: Fourth Advent
Home MB HeraldHomepage CMU graduation 2014

Graduates challenged to imagine what the world could be 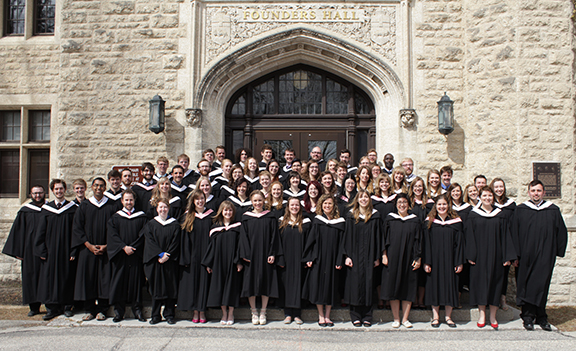 Make the future a figment of your imagination. That was the message delivered to 80 graduates at Canadian Mennonite University’s graduation service this past weekend.

“Faith in God compels us to imagine what the kingdom of God in our wildest dreams could be,” Don Friesen said during his address at the event, held Apr. 27, 2014, at Immanuel Pentecostal Church. “Imagination looks at the world as it is, and seeks to reshape that reality.”

Friesen, lead pastor at Ottawa Mennonite Church for more than 30 years before retiring in 2012, encouraged graduates to envision human community as a place to find hope and healing – a place where fears and prejudices diminish.

“Imaginative visions will help us to become, as a hymn expresses it, a welcome ‘promise of the new humanity,” Friesen said. 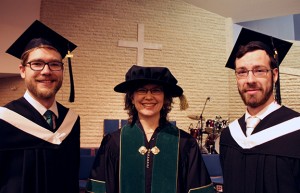 During his valedictory address, Scott Sawatzky (BA, four-year, English major) said that studying literature at CMU had taught him the difference between “easy meaning and difficult, nuanced, complicated meaning.” Easy meaning is what children are so often given, he explained, while good literature, like life, rarely offers such clear direction.

“All of this is to say that, as we move from the academics and relationships that have marked our studies here at CMU, let us never forget to revisit and rethink what we’ve learned, to see old things with new eyes and new things with old eyes,” Sawatzky said. “Let us enact what we have learned here in a way that is never static but always grounded, never satisfied but always loving.” 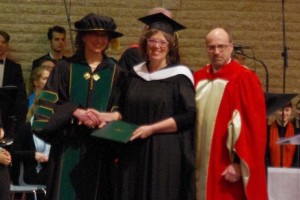 Joan Muehling, who received an MA, is the first student to graduate from the MBBS-CMU partnership.

Presiding over graduation ceremonies for her second time as president, Cheryl Pauls conferred 78 undergraduate degrees, two master of arts degrees, and two certificates in Biblical and theological studies – one at the undergraduate level, and the other at the graduate level.

“This is a time of celebration,” Pauls said.

Reflecting on his time at CMU during a chapel presentation at the end of the school year, Blayne Stobbe (BA, three-year, English and history majors) said he came to the university uncertain of what he was looking for.

“I am leaving CMU with the opposite,” said Stobbe, who plans to become a teacher. “I am leaving with answers to some of my questions, but with many more poignant and tough questions to work through and a drive to discover more answers.… I am leaving with a passion to learn that burns more brightly than when I began.”

During the same chapel, Danielle Bailey (BA, four-year, biblical and theological studies and social science-counselling majors) shared how CMU’s community had changed her in profound ways.

“My professors, mentors and peers kept encouraging me to think about pastoral ministry. I scoffed, but slowly this Anabaptist theology began seeping into my bones, and gradually I decided to listen to the voice of the Spirit, speaking through the people around me,” said Bailey, who was offered a part-time position as pastoral associate at Springstein Mennonite Church in Springstein, Man., after completing a practicum placement there as part of her degree.

“I have been openly welcomed and encouraged to use my leadership gifts.”

The graduation service was the last of a number of events that occurred during graduation weekend, including a gala dinner, CMU’s annual In Gratitude presentation and Spring Concert. 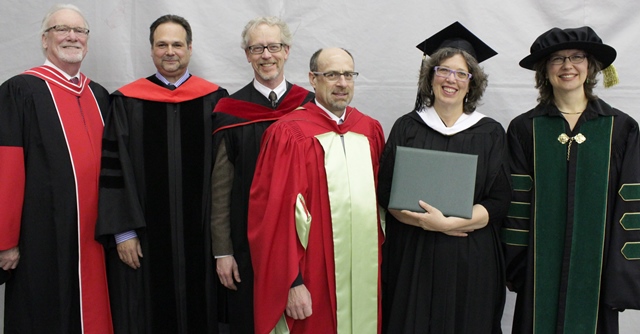