What's New
Through the conflict, life carries on in Ukraine
A FOCUS on Mission
Must Patience Be So Slow?
Harold Jantz: A Heart for the Mennonite Story
Lorlie Barkman: A Life of Creative Engagement
Last Days, First Days
Women in Ministry: Bertha Dyck
January Moment in Prayer “Holy Spirit—Fill Us!”
The Church as the Patient Body of Christ
Advent: Making Much of Jesus: Christmas Day
Home News Buildings crumble, but faith remains 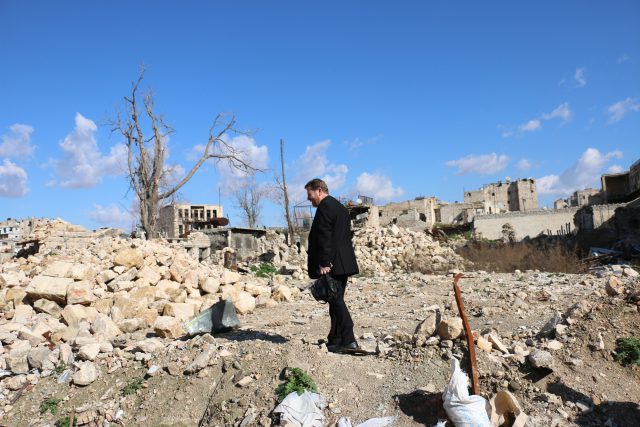 The Rev. Ibrahim Nseir, pastor of the National Presbyterian Church of Aleppo in Syria, stands at the site where his church once stood. The building was destroyed in 2012, hit once in May of 2012 and then again more seriously in November of 2012. (MCC photo/Emily Loewen)

In the old city of Aleppo, Syria, Rev. Ibrahim Nseir stands on the pile of rubble that used to be his church. What was once a building where his congregation worshiped is now a pile of broken stones and dust. It’s a sunny February day, the bright sky a stark contrast to the destruction on the ground.

Though its church building has crumbled, the faith of the National Presbyterian Church of Aleppo has held strong through seven years of war. In its new building in another part of the city, the congregation fills the sanctuary on Sunday mornings. Rev. Nseir says the conflict has actually helped the church grow stronger. “Because of the crisis the people started to regather and rethink their priorities,” he says.

Churches in Syria, like Rev. Nseir’s, have been strong partners for MCC in helping provide relief during the conflict. They reach out to their communities and provide support to those in need, both Christians and Muslims. “During the crisis people forgot their religion and remembered one thing, we are all human beings,” Rev. Nseir says.

His congregation is one of the churches helping distribute shipments of MCC comforters and kits, and cash allowances coordinated through the Fellowship of Middle East Evangelical Churches (FMEEC). 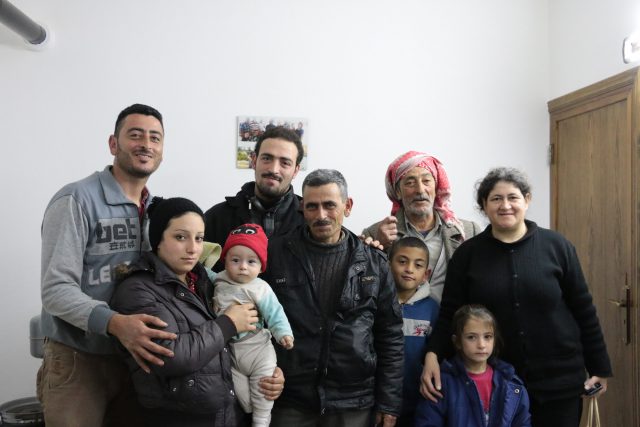 This family was displaced in 2014 and came to Fairouzeh. They were eating one meal a day because they didn’t have enough to eat. They used to have a big house, but now they are renting one room for the whole family. Their village has been destroyed by extremist groups since they’ve left; group members took over their house for three months. They’d like to go back one day but only once it’s safe. Names withheld for security. (MCC photo/Emily Loewen)

Susanna,* her husband and three children rely on the cash allowances, the equivalent of $65 CDN per month. In 2013 her only son was kidnapped by armed groups and held for ransom. The family sold their two-bedroom house for the money to get him back. She estimates the allowance covers approximately half of their monthly needs, paying for things like medication or electricity. “I always thank God for the ministry of the Presbyterian church of Aleppo,” she says. “And I ask the Lord to bless those who are giving. The assistance is sustaining us.”

For people who have lived through seven years of war and continue to see a country full of conflict, the support also brings hope. In distributing relief, Nseir tells those in Aleppo that it is a sign that “God is doing a lot in the country, God is not absent.”

In Homs, Bishop Selwanos Boutros Alnemeh of the Syrian Orthodox church says the role for the church in this crisis is to give people hope, strength and a light to move forward. Providing the community with much-needed supplies helps provide that hope. The Syrian Orthodox Church distributes MCC monthly cash allowances, and we provide financial support for orphans at the SOC orphanage and their host families (where the children moved after the orphanage was damaged). MCC also helps the church provide families with winter supplies each year like heaters and fuel, and in some locations the churches help with MCC’s monthly food distribution project.

Bishop Selwanos says the partnership the Syrian Orthodox Church has with MCC means the church can meet the needs of the community. “This light helps them cross step by step through this dark time,” he says. “Our hope came from [MCC], because of you we bring hope to others.” 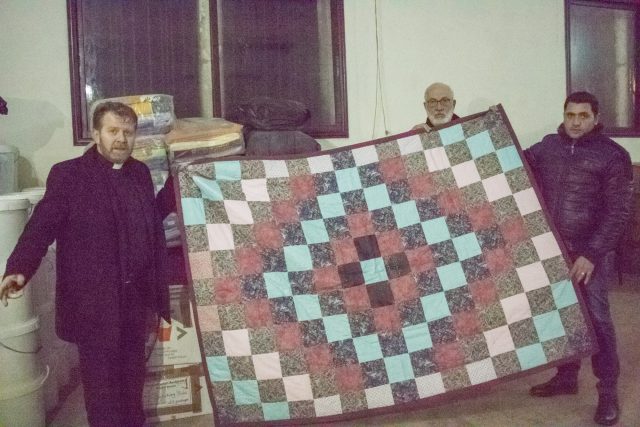 Rev. Ibrahim Nseir with an MCC comforter made in West Europe ready to be distributed in Aleppo, Syria, by the National Presbyterian Church of Aleppo. (MCC photo/Emily Loewen)

Fadi* and Reem* and their family are receiving the monthly cash allowances through the Syrian Orthodox Church in Sadad. They lived in Al-Qaryatayn, a town near Homs until the town and their home was invaded by armed fighters. They used to live in a large home and now they all share one rented room in Sadad. Rent keeps going up in the area so they have had to move several times during the war. Though they work when they can, the family can’t earn enough to meet all their needs. The money they get from MCC helps cover their rent, or oil for heaters in winter.

The Syrian Orthodox Church itself has also been damaged by the conflict. The church in Homs and the orphanage on the same grounds were heavily damaged in 2012 as an opposition group behind the church traded fire with the government forces on the other side. The back of the church, the roof of the sanctuary, the orphanage, the courtyard and Sunday school rooms were all destroyed.

The church buildings have now been rebuilt and the congregation continues to worship together. Their faith remains strong, and Bishop Selwanos is still optimistic for the future, “We have a big hope that Syria will be set free and be peaceful again,” he says. 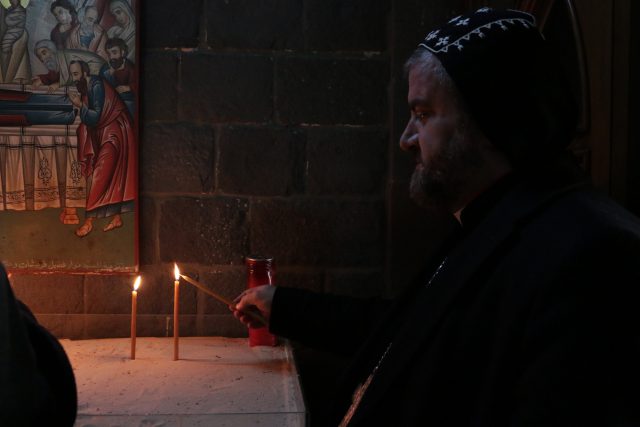 Bishop Selwanos Boutros Alnemeh, Bishop of the Syrian Orthodox Church in Homs, asked the MCC visitors to stop and light a candle to pray for peace in Syria.

The support the church provides together with MCC helps them keep that hope alive. Knowing that support comes from other Christian churches around the world is especially meaningful.

Fathi* is the head of Um al-Nizar Relief and Development Committee (URDC) the development arm of the Syrian Orthodox Church in Homs. When he met with MCC staff inside Syria in February, he said that by working together MCC and the Syrian Orthodox church had become family. He wanted to thank the many individuals and churches around the world who support MCC’s relief work in Syria: “These people’s generosity and donations are the key to bringing back life to Syria.”

[Emily Loewen is the digital content coordinator for MCC.
Mennonite Central Committee: Relief, development and peace in the name of Christ