What's New
Through the conflict, life carries on in Ukraine
A FOCUS on Mission
Must Patience Be So Slow?
Harold Jantz: A Heart for the Mennonite Story
Lorlie Barkman: A Life of Creative Engagement
Last Days, First Days
Women in Ministry: Bertha Dyck
January Moment in Prayer “Holy Spirit—Fill Us!”
The Church as the Patient Body of Christ
Advent: Making Much of Jesus: Christmas Day
Home News Building peace amid scars of war

Building peace amid scars of war 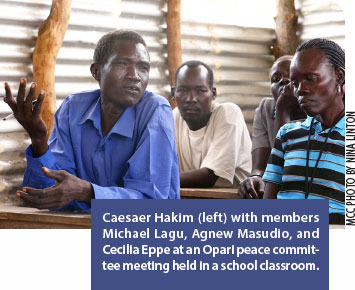 After fleeing aerial bombings and living in a refugee camp in Uganda for 14 years, Caesaer Hakim and his family were excited that the day to return home had finally arrived.

But when they got to their ancestral home in Opari, they found another family living on their land.

“The first thing I was asked when I came back was if I was really from Opari,” said Hakim, a father of six children ages 4–18. “I wanted to move back to the land where I grew up and here you have somebody telling you that you can’t build your house on your grandfather’s land.”

Opari is an administration district about 100 kilometres southeast of Juba, the capital city in the newly independent country of South Sudan. The region was among many in South Sudan abandoned and devastated during the 21-year civil war that claimed the lives of two million and displaced four million.

To help people resolve conflicts that arise as they rebuild their lives, the Sudan Council of Churches, with funding from Mennonite Central Committee (MCC), has established peace committees in Opari and nine other communities in South Sudan and Sudan.

The committees receive training and support on peace building, conflict resolution, and other activities that help people live in peace and harmony.

Hakim chairs the Opari peace committee. He first learned about peacebuilding in the refugee camp. One of the lasting impressions from his first training session was the cooperation among people from different ethnic groups.

“We had different needs, different languages, but we came together as one people,” he said. “When I came back home to Opari, I came home with a heart for bringing people together.”

His skills were soon put to the test as he dealt with the new family living on his land. “If I had not had the peacebuilding training, I would have picked a quarrel with them. Instead, I built my house on another plot of land.”

Neighbours are aware of this action, and the example he set earned him respect as a peacebuilder. This enables him to share his knowledge and skills as he leads the committee and helps other families resolve conflicts.