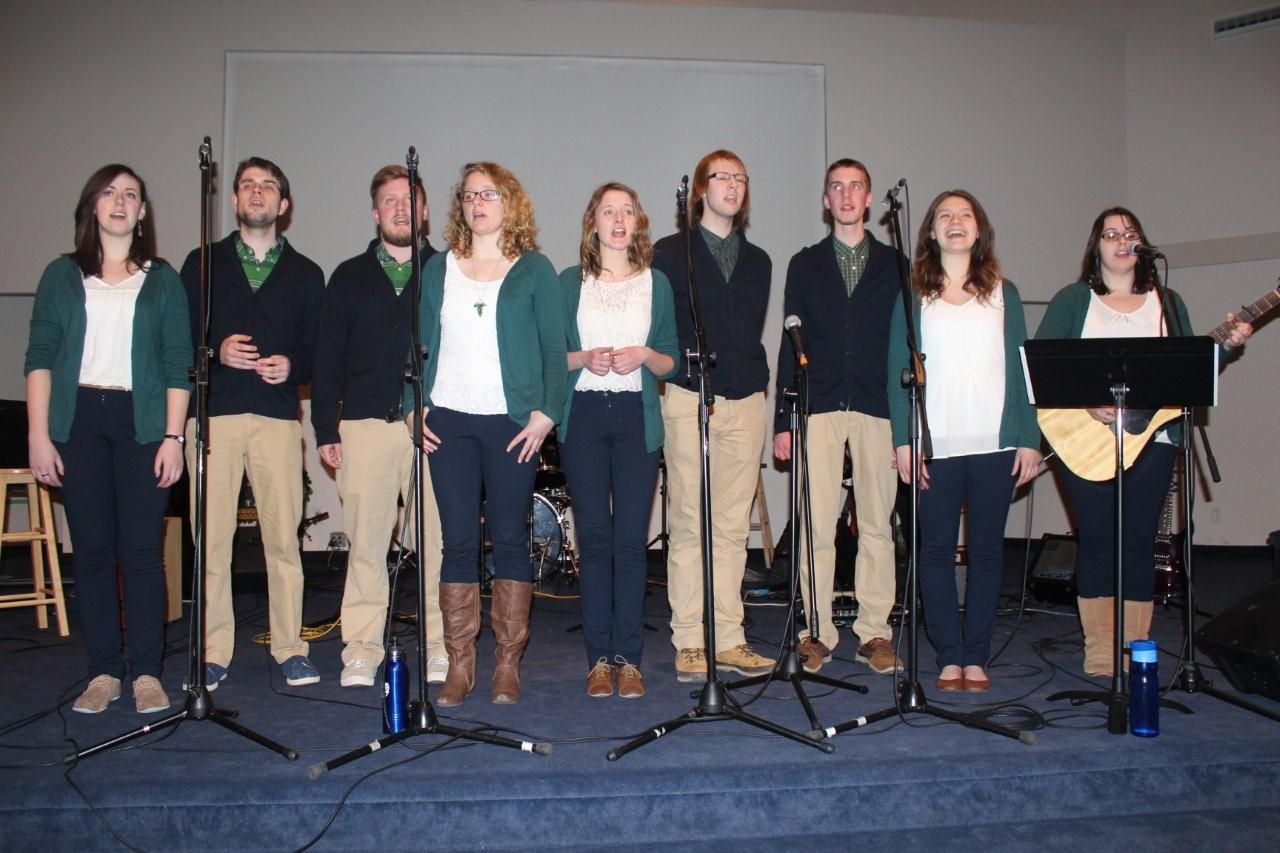 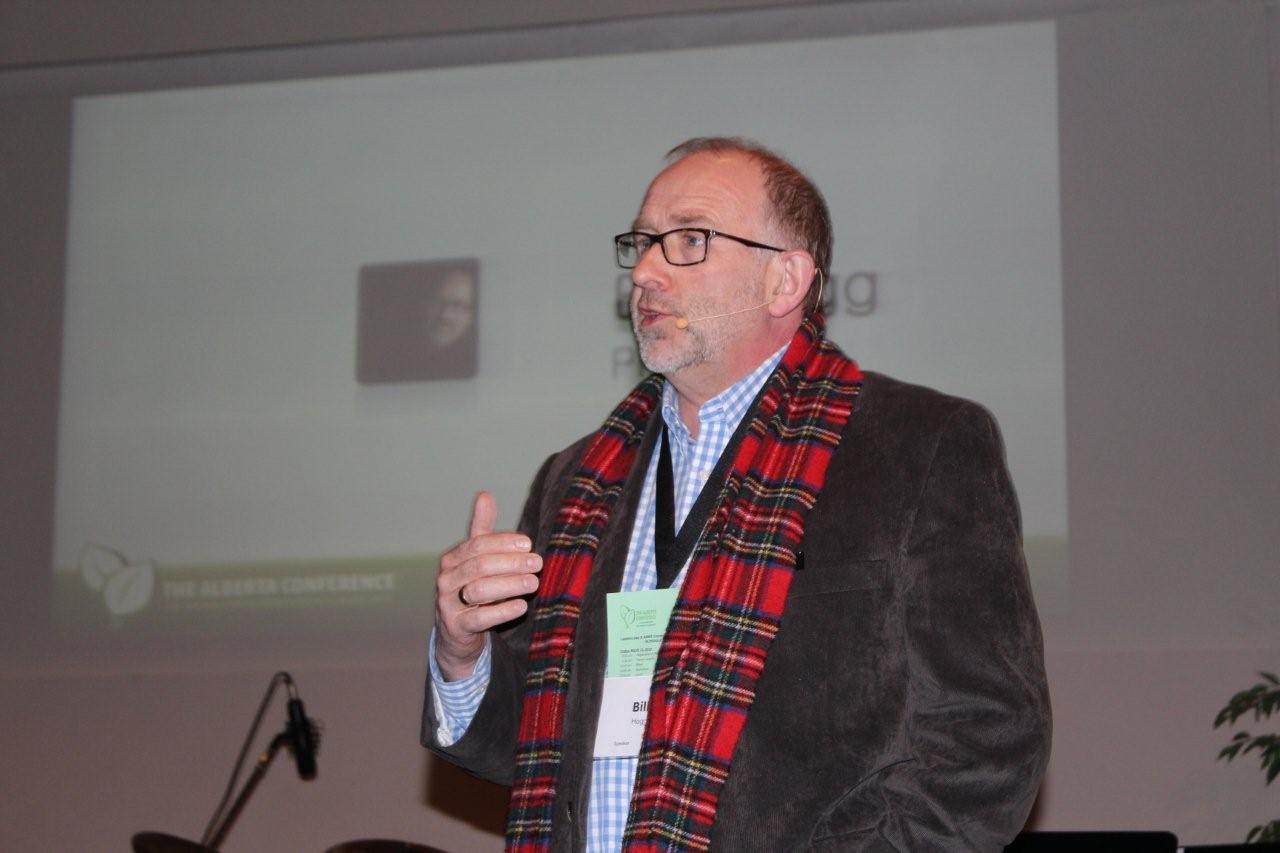 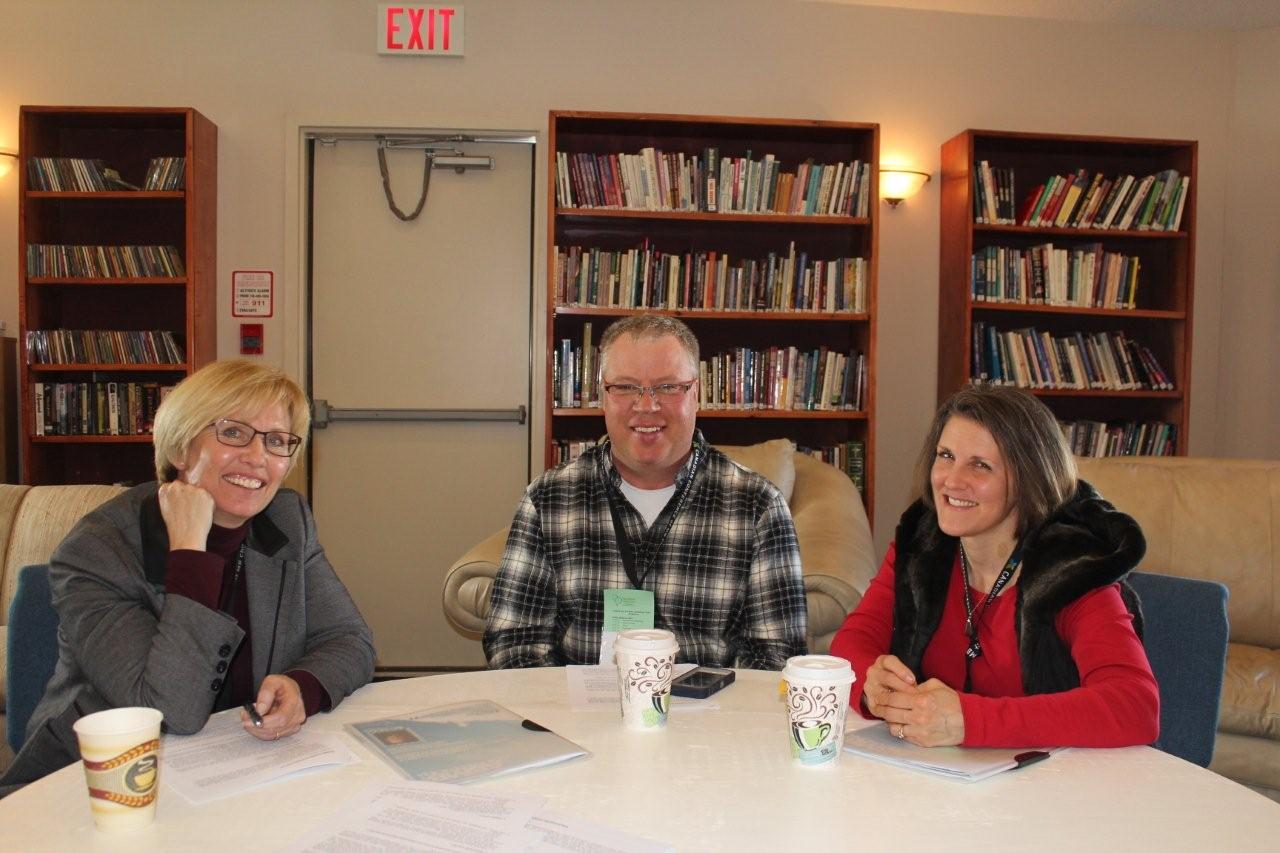 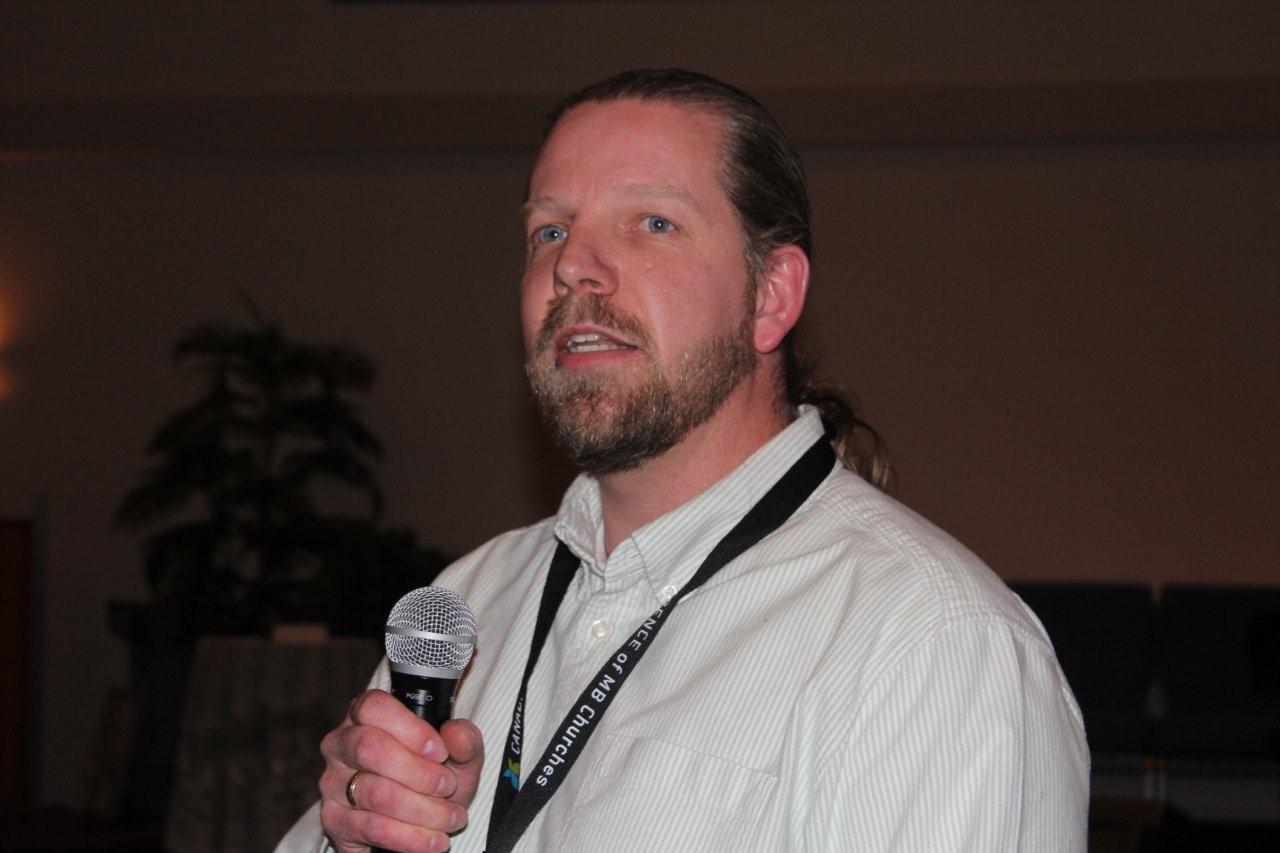 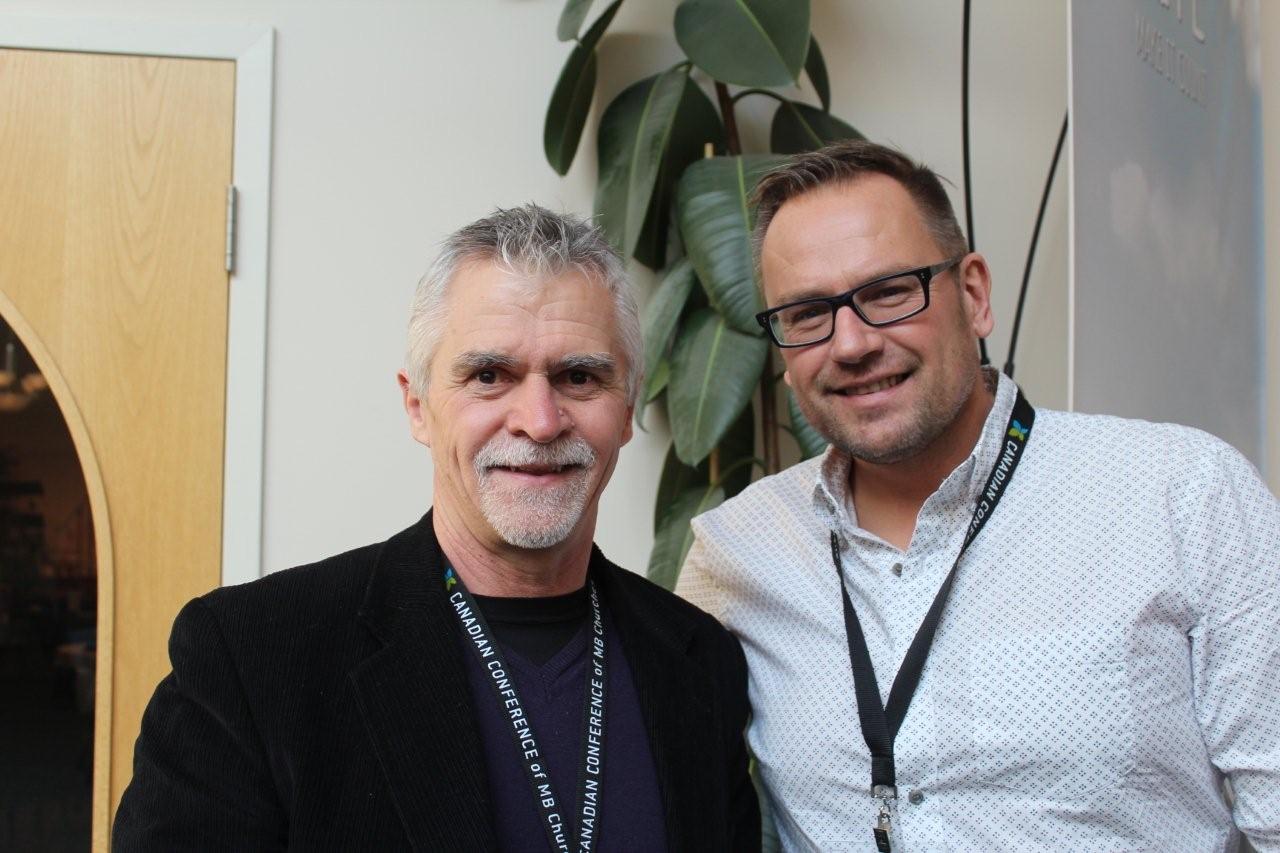 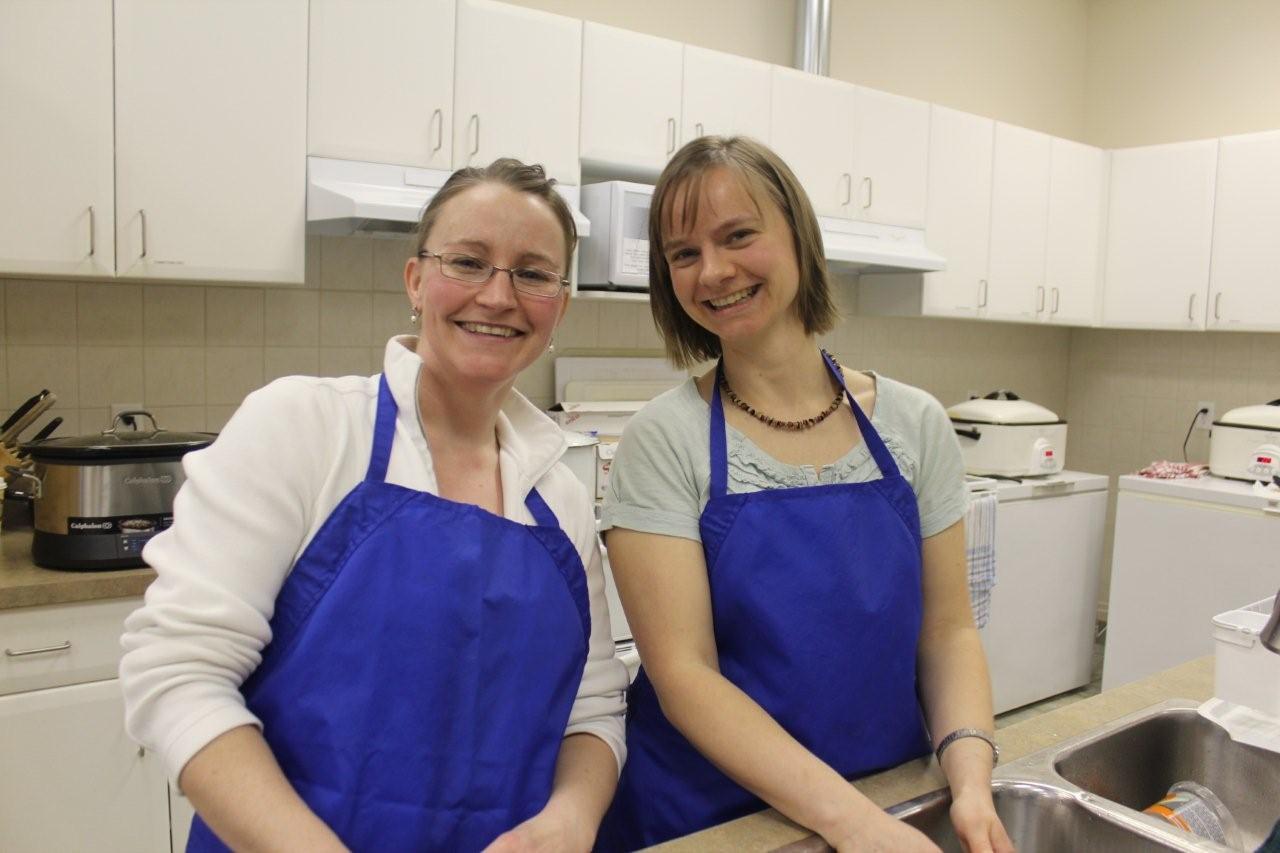 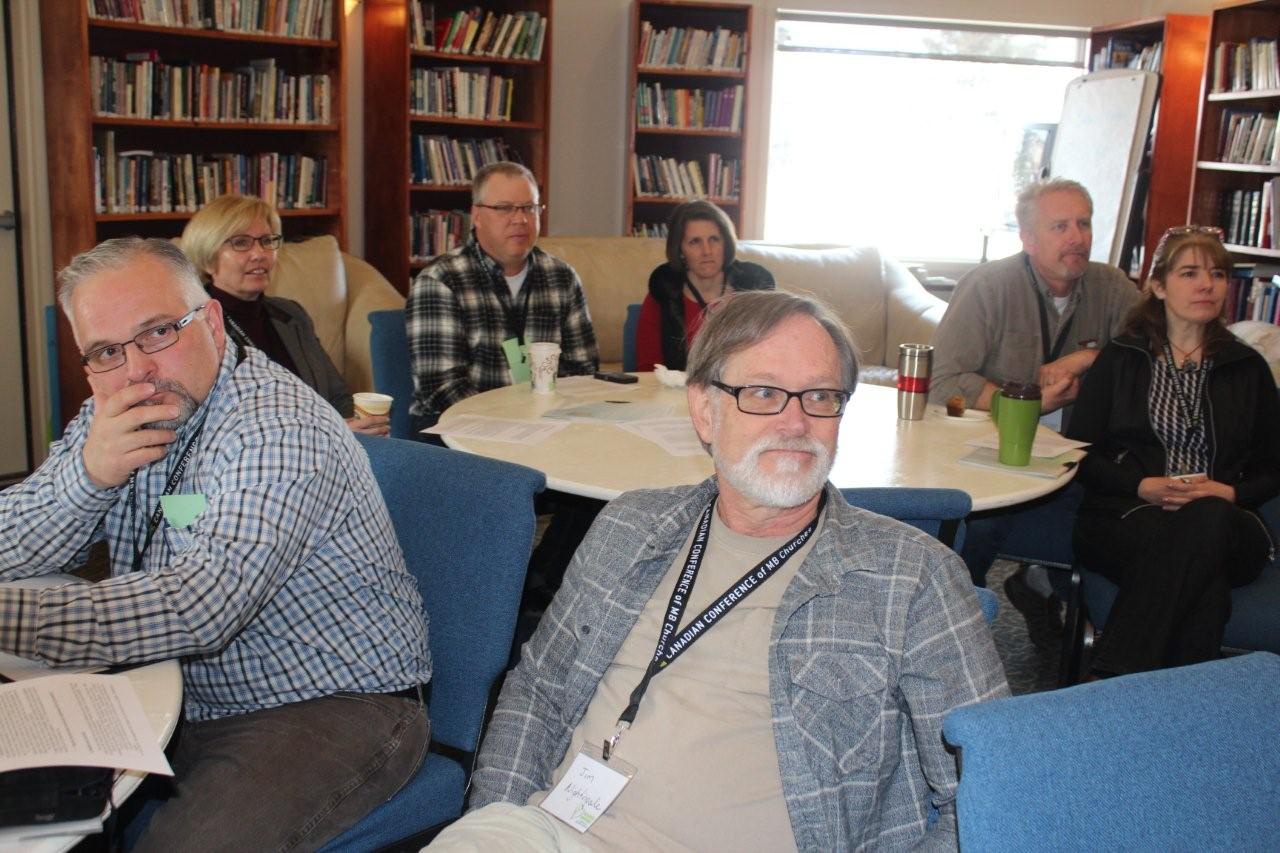 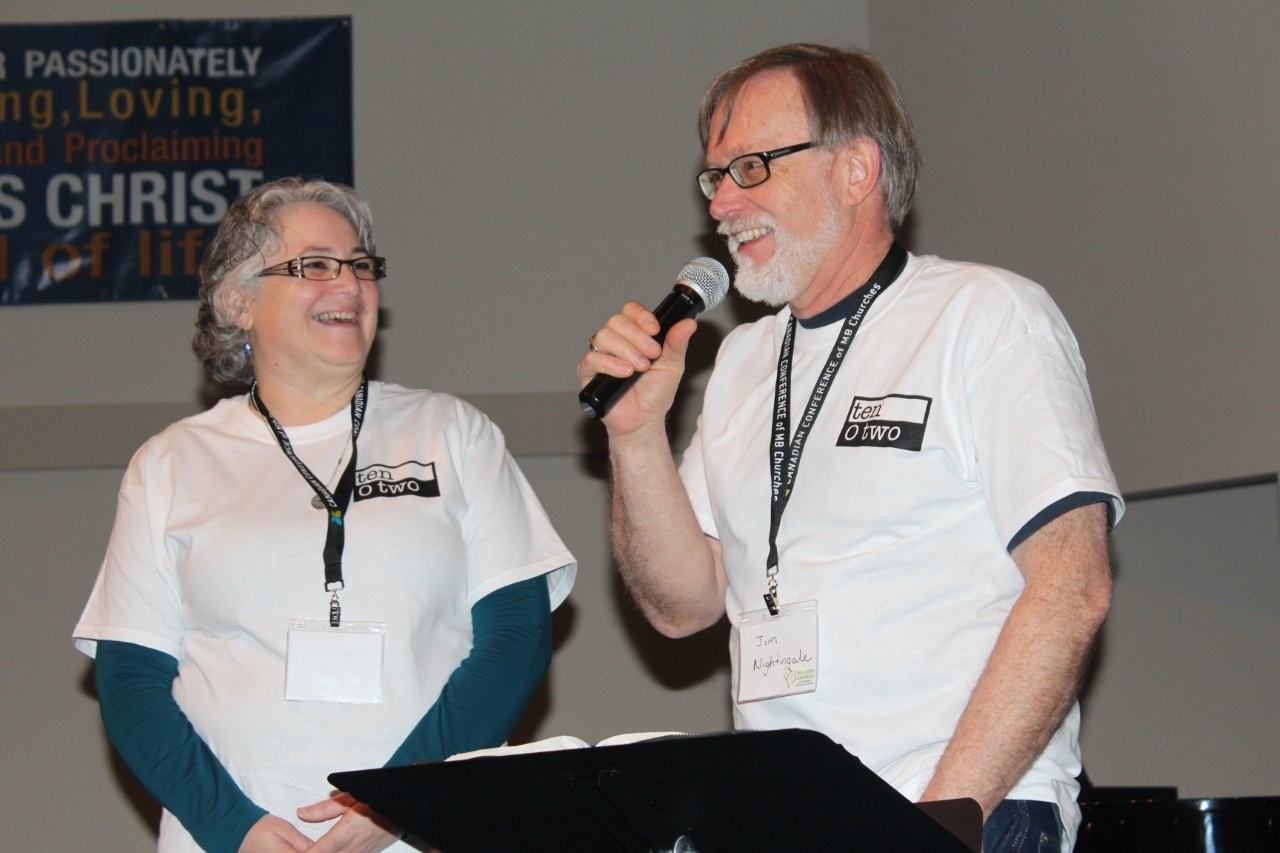 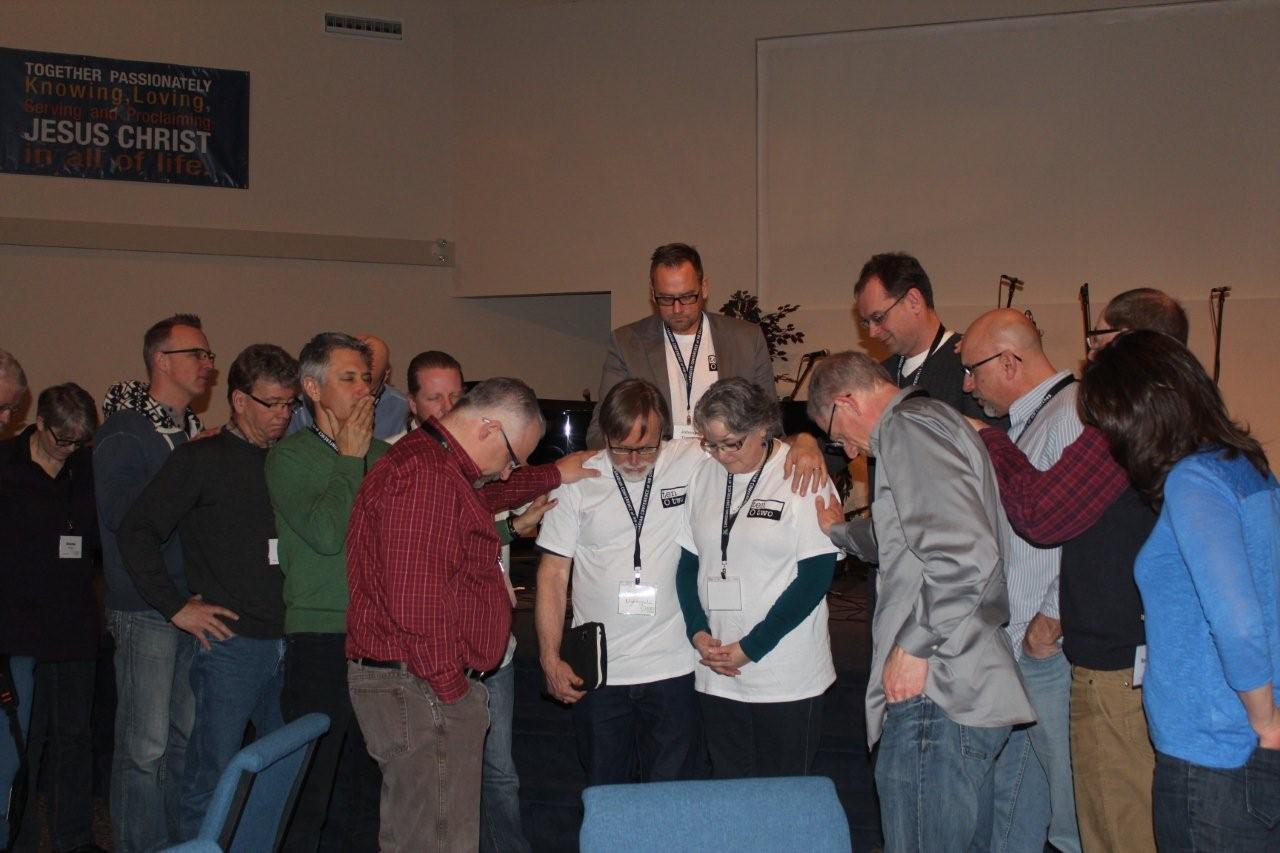 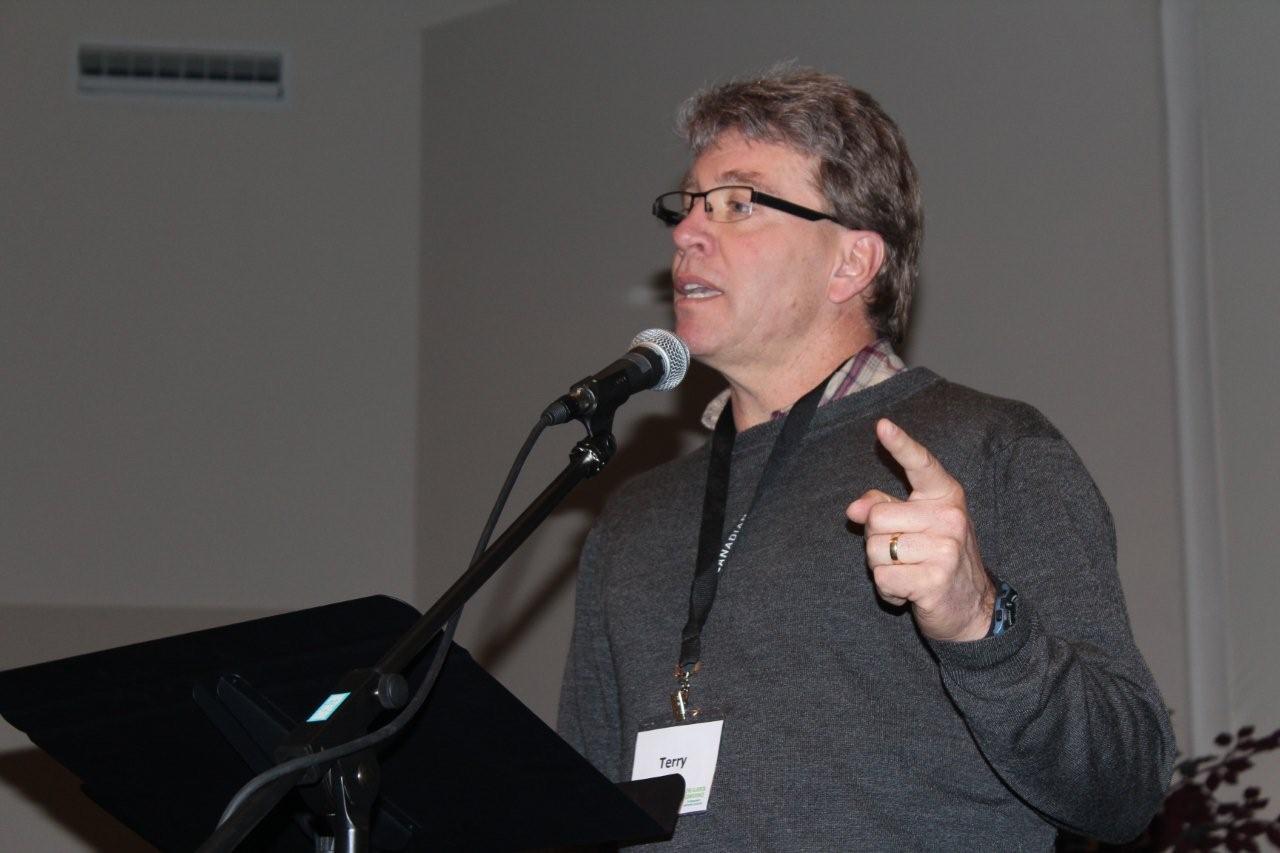 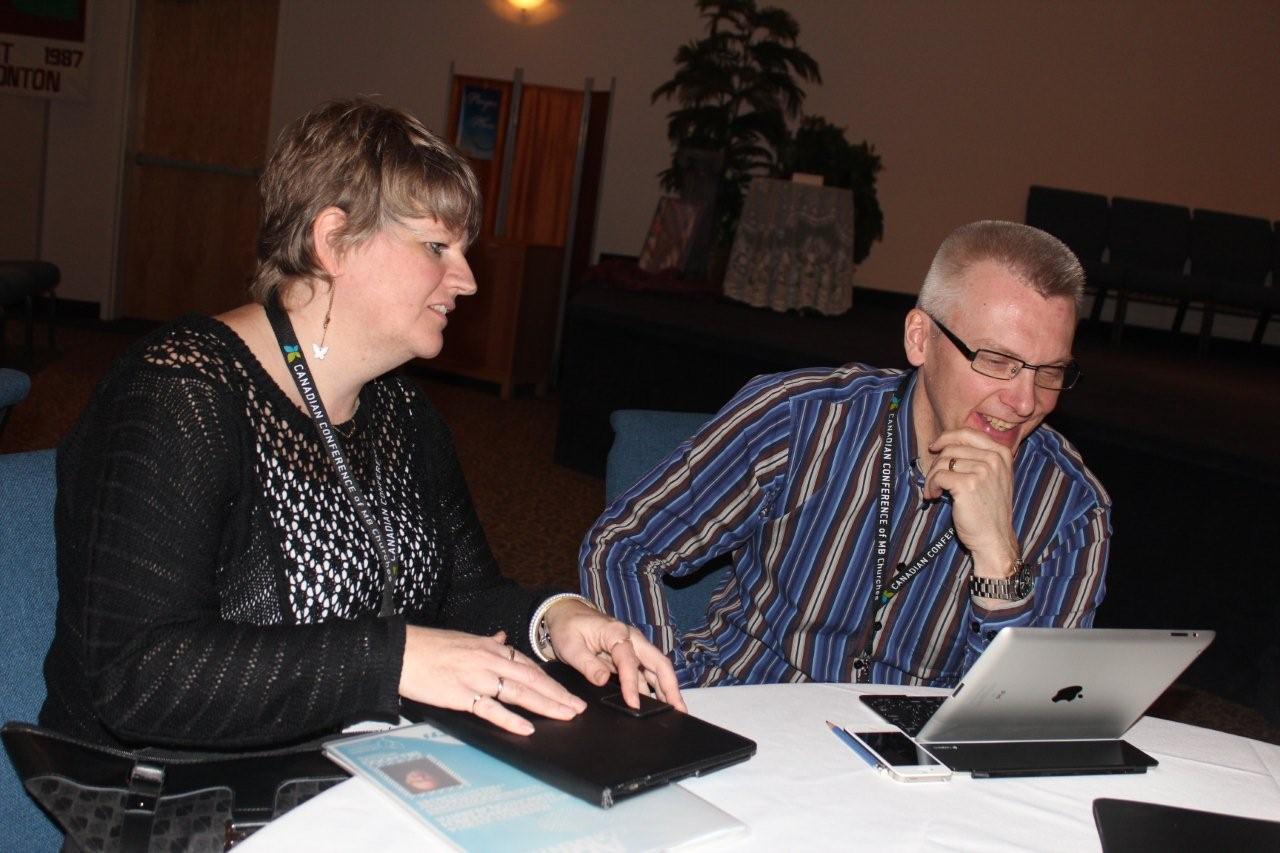 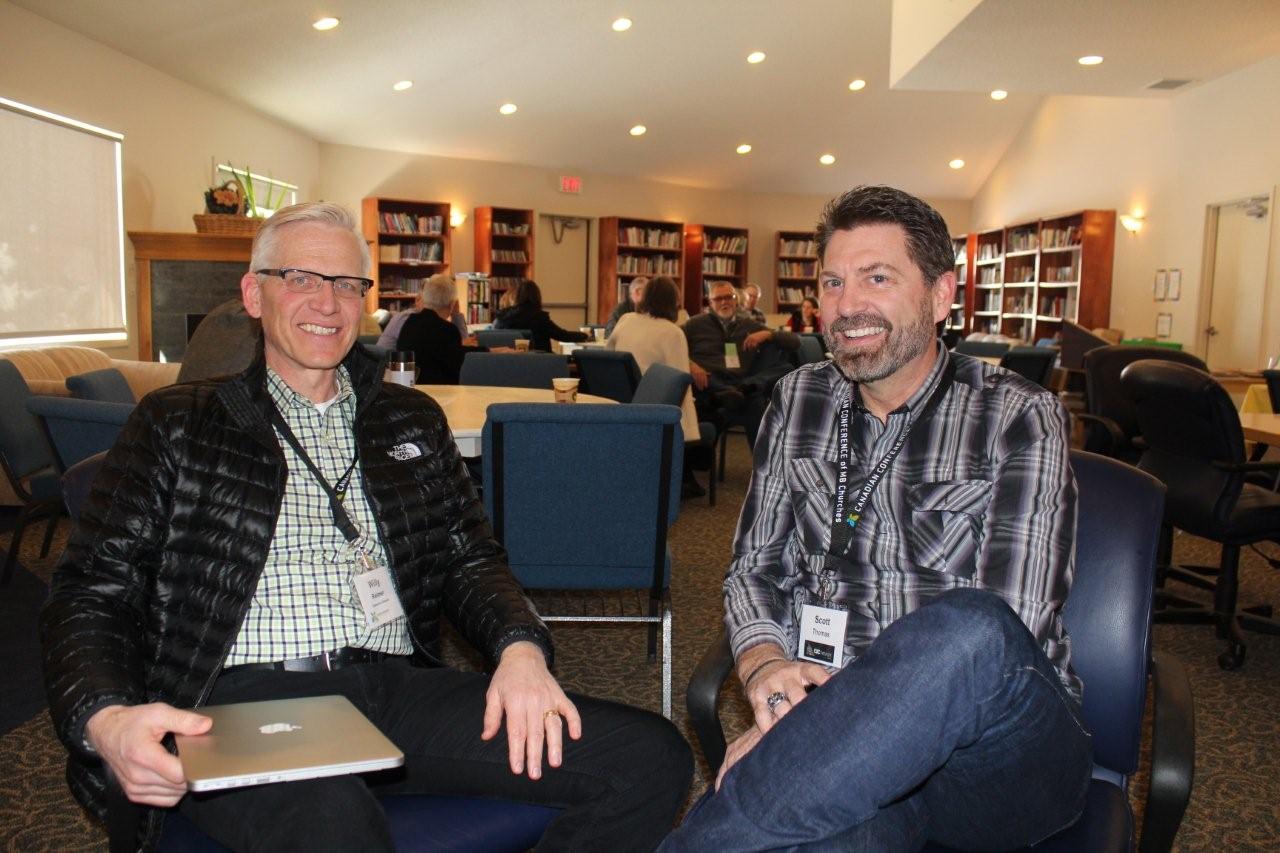 Pastors and leaders witnessed an answer to prayer at the annual convention of the Alberta Conference of Mennonite Brethren Churches (ABMB) which took place Mar. 21–22, 2014, at River West Christian Church.

At the Friday evening session, moderator Val Martens reported that it appeared only 34 delegates would be present for the Saturday business sessions. This was 16 people short of a quorum.

She invited people to pray about the situation and 52 people, two more than needed for a quorum, were present at the Saturday meeting.

“It was God working,” she said. “We prayed about it and people came.”

Martens shares the hope and prayer of Willy Reimer, executive director of the Canadian Conference of Mennonite Brethren Churches (CCMBC), who encouraged delegates to see this concern as “a turning point” and the beginning of a new day for Alberta churches.

Reimer, a Calgary resident and founding pastor of SunWest Christian Fellowship in Calgary, said the province continues to grow and show leadership and innovation in other sectors, but that this growth is not evident in MB and other churches.

“I want to see robust churches in the MB denomination and beyond,” said Reimer. “We have all the skills and resources in this province to do what Christ has called us to do.”

He reported eight of the 21 MB churches are looking for senior pastors. “I pray a year from now we will look back and see these positions filled,” he said.

Delegates also heard a report from Jim and Marilou Nightingale about the difficult decision to close Foothills Community Church in Pincher Creek at the end of January. They asked people to join them in praying for themselves and others from the community who have started a journey of healing.

Foothills Community Church had provided Christ-centred ministries in its community for 66 years. The building and assets have been donated to ABMB. Plans are to use the building for a church plant when God calls a planter to the community.

Under this “one-team organization,” ABMB will pass all financial resources to the Canadian conference who will provide leadership development and other support.

The ABMB conference will continue as a legal entity. The ABMB faith and life team will continue to function as it has in the past.

CCMBC will lead the process of hiring an ABMB conference minister, who will be accountable to CCMBC and process and authorize all ministry initiatives in Alberta.

Nelson Senft and Dennis Wiens were affirmed as new board members, and Kerry Dyck and Laurence Hiebert as returning board members. They join Conny Neufeld and Elroy Senneker who are in the middle of their terms. Delegates expressed appreciation for Val Martens and Gary Burke who completed their terms.

Through reports and inspirational talks, pastors and leaders shared what God is doing in and through the Alberta churches and partner ministries.

“It’s in the little moments that we see God at work,” said Kerry Dyck, pastor of River West Christian Church.

Dyck shared a story of a mother in the neighbourhood who had inquired about infant baptism for her child. Dyck had explained the church does not baptize infants but provides parent/baby dedication services, where parents pledge to raise the child in a Christian environment.

Shortly after this meeting, the mother started attending the church and was recently baptized and joined in membership.

Elroy Senneker of Urban Grace Church in Calgary shared he was part of a prayer walk in Calgary. As he looked at the densely populated high-rise buildings, he saw more than lights in the windows. “I saw people created in the image of God who need a Saviour,” he said.

After serving as lead pastor at Calgary’s Dalhousie Community Church for many years, Brad Huebert is beginning a C2C church planting apprenticeship at Urban Grace, Calgary.

He is learning through the apprenticeship program to look in the mirror and recognize his own need for Jesus. “It’s not us and them, we all need Jesus,” he said.

At Camp Evergreen near Sundre, directors Bob and Bev Kroeker and their camp staff share the love of Christ through serving guests with excellence. This commitment to excellent service encourages children, who come to the camp through outdoor education programs, to register as summer campers. To nurture a stronger relationship with MB churches, new cabins were named in honour of founding ABMB congregations.

Bethany College president Howie Wall said a recent survey of alumni showed that 95 percent of graduates from the past 10 years were involved in a local church. Furthermore, almost 38 percent were involved in leadership roles.

Lloyd Letkeman of MB Mission Central Canada said the 10-day discipleship and mission program, SOAR, is helping young people and churches get involved in mission in their home provinces. He encourages Alberta churches to offer this program.

Cory and Masami Giesbrecht of Winnipeg are following God’s call to serve in Japan. “Each year 30,000 people die from suicide and many are enslaved in the sex trade,” said Cory.

“Prayer is the beginning, the middle and the end of everything that God will accomplish in Japan.”

Director of caring for leaders, Terry Lamb, said he has a “front row seat” as he hears pastors talk about their passion for God’s mission for the church. John Willems, BFL representative, hears pastors express their love for Christ through the credentialing process.

In his stewardship ministries report, Lorne Willms said the Scriptures teach that “God is the Lord of all,” including finances. He encourages churches to use resources provided through Leaders2Learners to learn more about financial management.

Guest speaker, Bill Hogg, national missiologist for the C2C Network, talked about the importance of reaching Canadians with the good news of Jesus Christ and helping them grow in their faith.

“God has a mission and the mission has a church,” said Hogg. “We don’t need more strategies, what we need is a fresh encounter with Jesus. Our job is to make disciples, to make followers of Jesus Christ.”