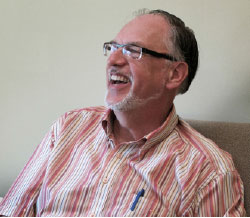 Before leaving your previous position as executive director of the Canadian Conference of MB Churches (CCMBC), you engaged in something called Apex – a process for mature leaders to discern their best contribution to ministry and kingdom development. How do you foresee your new role with ICOMB as a vehicle for making your “best contribution”?

Apex focuses on a “major role summary.” It leads participants to craft a statement that brings together all the different things that have been accomplished in their lives. For me, the summary affirmed how I create a “safe place” for people – for individuals and groups – to listen to God.

I think the thing that attracted ICOMB to me is how I demonstrate a great deal of respect for people – for everything they bring to the table. As ICOMB executive director, I’ll work hard to create a safe place to figure out what God is saying to us.

When you accepted the role of part-time ICOMB interim executive secretary in 2011, did you imagine you’d be called to this position in a permanent capacity?

In summer 2010, my ICOMB colleagues said, “Dave, we think you should do this.” At that point, I only agreed to serve as interim; I wanted due process. Then, [at our meeting in May] the guys stuck with their choice; they saw something in me. Other people may do things more independently, but I do things differently. My selection into ministry scenarios has always been discerned out of circumstances read into by community. If they call, who am I to resist God?

With the rise of the Global South, and given that the largest MB conferences are from India and DRC Congo, how will you lead ICOMB from a North American context?

I’m concerned about not retrenching into a Global North mentality – with a North American set of expectations and assumptions.

What sort of assumptions?

How things get organized, how fast things get done, how directive we are. The upside is that I’m not very task-oriented [chuckle]. I’m more relationship-oriented, so my first question always is “How’s everybody in the room doing?”

So you relate well with people from the Global South.

Yeah. Also, my background – growing up poor – has made me slightly more amenable to the challenges of working at a global level.

In North America, we face the problem of sheer wealth. It’s a distraction; it makes us carry certain assumptions and demands. It does something to our idea of the kingdom. In the [North American] MB world, we have a lot of money. It’s good. It’s a gift. But growing up poor, there’s been divine preparation for my role with ICOMB.

Is ICOMB doing anything else to mitigate North American influence?

Our chair, Rudi Plett, is from Paraguay. Although German in background, Rudi’s value system and personality are very South American. As well, [education facilitator] Dalton Reimer is hoping to close out his work, so I’m actively looking for leadership for education initiatives from the Global South.

ICOMB’s new mission statement says it “exists to facilitate relationships and ministries which enhance the witness and discipleship of member conferences.” How are you planning to fulfill this mission?

We want to go gently into programmatic stuff in order to really focus on relationships. But sometimes, those relationships just find themselves.

For example, during the 2011 Higher Education Consultation, every-body was talking about the Japanese tsunami since the consultation convened just after the disaster. When [Japanese representative] Yoshifumi Tanaka told his story, it touched the heart of Heinrich Klassen from Germany. Heinrich went home and raised about €27,000. It all developed out of relationship – outside any ICOMB programming. Crises often create opportunities for partnership.

Another example comes from a congregation in the Bund Taufgesinnter Gemeinde conference in Germany. The church heard about the plight of leaders in Angola, and discovered most Angolan pastors don’t own a Portuguese Bible. So, they made contact with the Bible Society in Lisbon and bought Bibles for the pastors. Because ICOMB exists, it has the capacity to facilitate these types of relationships.

Now 22 years old, ICOMB is growing – with 20 partner conferences around the world, and several others seeking to join. What excites you about the future of ICOMB?

ICOMB has taken off in the last couple years because there’s been more definition [to the organization]. We sent the message we were serious when we hired Victor Wall as executive secretary in 2005. And the ICOMB Confession of Faith has given us clear theological identity – it’s now been translated into about 12 languages.

In the next three years, I’d like to personally visit every one of our conferences. Part of the reason for those visits will be to conduct workshops around our Confession of Faith. It’s an excuse for more conversation – to build Mennonite Brethren fraternity and witness.

I’m excited about genuine theo-logical dialogue and interaction. When I see how theologically astute our partners around the world have become, I imagine possibilities. What [our global brothers and sisters] bring to a discussion about the Bible can help us, not just in North America but everywhere, as long as we really listen to each other and God.

I’m also excited about love within ICOMB. “Love covers over a multitude of sins” (1 Peter 4:8). The relationships between our conference representatives create such a positive atmosphere. We really care for each other.

What do you see as the greatest challenges for ICOMB?

There’s always disparity between different areas of the world. We’re still uneven on a whole bunch of counts.

One of the big challenges is language. In our meetings, we translate on the fly – sentence by sentence – but there’s still too much information that gets dropped. If we’re going to have ideal theological conversation, we need language assistants. So, we’ve made a new commitment to use independent translators in the future.

The key is to create open space for ICOMB participants to have a voice. My hope is that everyone will feel a sense of freedom – of not being controlled by North American assumptions, standards, expectations, or agendas. Ultimately, we want to be able to say the Holy Spirit had control of our meetings. The Holy Spirit uses [the challenges of] intercultural partnerships to help us break out of our boxes.

The kingdom of God is always full of surprises; we never know where it’s going to go, or how it’s going to come to us. Partnerships are similar. We don’t know what’s going to connect, or where those connections will lead.

How can Mennonite Brethren around the world pray for you?

Wisdom is the first thing that comes to mind, the ability to focus on priorities. I need to manage my travel – all the fraternal visits I want to do – and the administration that needs to be done. It’s about figuring out how to best discharge my energies.

We make so many mistakes – known and unknown – that we need the power of the Holy Spirit. Please pray that God’s presence and Spirit would infuse my choices and my work.

In the end, I think God’s will is going to be done. I’m just management. It’s a gift, and I’m just watching it happen. I ask for prayer for whatever God wants to do.