What's New
Delete or not to delete, that is the...
Believers bring water for drought baptism
Encouragement to those in the arena
Keeping attention and making an impact: A few...
Open hands to reconciliation
From the editor
Approaching truth and reconciliation with love in our...
MB Seminary offers new MA in Transformational Leadership...
Multiply August Ukraine Updates
Book Review of Return Stroke: Essays & Memoir...
Home Arts & Culture Anthology delivers

What You Get at Home
Dora Dueck 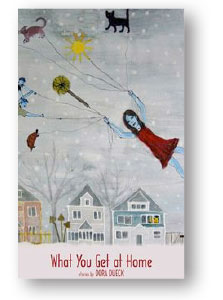 When your last book (This Hidden Thing) wins Manitoba Book of the Year, your next work faces significant performance pressure; Dueck’s What You Get at Home lives up to it. This short story collection delves deep into the hearts of its Mennonite characters, and with few words evokes powerful emotion.

The theme of homesickness weaves throughout many of the stories: a Catholic woman who moved across Paraguay for her Mennonite husband, an old man seeking answers about his mother’s long-ago death in Russia, an immigrant’s visions of her faraway mother spying on her at the spa. As the cover art suggests, ironically it’s the ordinary objects they leave behind – a train, a crucifix, a broken bowl – that tie people to their experiences.

“My Name Is Magdalena,” a beautifully devastating account of one woman’s flight from Russia, will resonate with MB Herald obituary readers. I read it over and over, tearing up at the understated manner of Magdalena’s re-tellings, the fortitude of her personality, and as the granddaughter of four Mennonite immigrants, the close-to-home feeling of her story. The images Dueck puts in Magdalena’s mind come close to poetry: a “sorrow…as big as a book but all its pages are blank,” “God dropping like a stone…dropping like a mother and locking his knees in the agonies of birth.”

“The Rocking Chair” explores the tension, symbolized by a coveted heirloom, between three adult siblings after their father’s death, a time when “their own spouses and children seemed milestones they’d passed in a brief ambitious dash away from their childhoods, a kind of detour now from what was essential.” Giving us a glimpse into the siblings’ secret joys and insecurities, Dueck allows readers to take each rival’s side in turn, simultaneously fostering empathy and judgment.

The final seven stories follow Liese, an immigrant from Paraguay to Canada, through her memories of childhood and her marriage to a Canadian Mennonite man. Like all Dueck’s characters, Liese is lovable for her flaws, her ordinariness, the honesty of her self-talk: her infuriation over her husband’s “astonishing ability to sleep” after a fight, the way her peevish son’s face was “like mud to her,” her mother’s “pinching and poking,” then “singing hymns with abandon as if [she’d] never been dissatisfied with any of us” that made Liese’s own judgments “take root.”

Here too, objects are representative: Liese’s contemplations on the ideal state of asphalt (Is heat a pleasant memory or a form of testing? Is cooling a letdown or a triumph?) parallel her questions about being remolded by, then firmly settled into, this new culture. Liese demonstrates that there is no ideal state of a human; we need both the heat of youthful longing and the refreshment of (partial) fulfillment “[leaning] against each other like objects thrown into a box” to create a life.

What You Get at Home is not just about lives, but the power of the written word. Dueck’s characters suggest words can be “linked to pull [one] from peril,” and make “everything safe and lit,” that a child’s ability to read is enough assurance “she’s going to be fine.”

Not attractions to fly past, Dueck’s stories are friends you’ll want to sit with for a time. In contrast to the view of the narrator in “Chopsticks,” who has “no idea what we might say that would get at the truth of our losses,” every story – whether about a father’s Alzheimer’s disease, a child’s disappearance, or a granddaughter’s homosexuality – “gets at the truth” in profoundly moving and poetic ways. It turns out “What You Get at Home” is a desire to read through the night.