What's New
A FOCUS on Mission
Must Patience Be So Slow?
Harold Jantz: A Heart for the Mennonite Story
Lorlie Barkman: A Life of Creative Engagement
Last Days, First Days
Women in Ministry: Bertha Dyck
January Moment in Prayer “Holy Spirit—Fill Us!”
The Church as the Patient Body of Christ
Advent: Making Much of Jesus: Christmas Day
Advent: Making Much of Jesus: Fourth Advent
Home Arts & Culture Deep and wide: manual for mission from everywhere to everywhere

Deep and wide: manual for mission from everywhere to everywhere 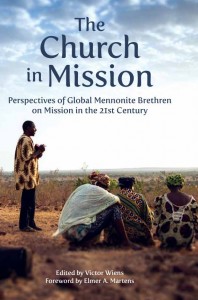 Wiens is the editor of a new 700-page mission manual, launching July 10, 2015 – in time for Mennonite World Conference in Harrisburg, Pa. Published by Kindred Productions, The Church in Mission is a joint labour of love by MB Mission and the International Community of Mennonite Brethren (ICOMB) to provide a deep and wide foundation for new workers in the global MB family.

Whereas the 1967 anthology by the same name (ed. A.J. Klassen) was directed toward a North American audience, the 2015 text is “truly a global text using global resources,” says Wiens. Of the 47 contributors, many are from the Global South.

Though Wiens’ original idea was to include only texts from 21st century writers for the 21st century audience, as the book came together, he realized “all of us who are writing about and engaged in mission stand on the shoulders of giants.” So he reprinted journal articles by select MB voices of the past (including anthropologists Jacob Loewen and Paul Hiebert, and Wiens’ mentor, missiologist Hans Kasdorf) – whose wisdom is timeless.

Many areas have a strong receptivity to the gospel, says Wiens, “but it reaches a mile wide and an inch deep.” As global Mennonite Brethren, we bring “our historical focus on discipleship that reaches deep – not just transforming outward behaviour – but hearts, worldviews, even communities,” says Wiens, “to be true to who God has called us to be: a community of renewal and mission.”

A major concern the volume addresses is cross-cultural sensitivity. For centuries, Western missionaries have enjoyed the mobility to intersect with various cultures. More and more, previously isolated cultures are also sending missionaries. The Church in Mission offers wisdom from Global South churches for the universal challenge of engaging culture without compromising the gospel.

Wiens gives the example of the Zuluagas from Colombia working with Wounaan and Emberá indigenous people in Panama. “The Zuluagas have worked hard at not coming in with a Colombian-style evangelism,” says Wiens. They have moved into the remote area, learned the peoples’ heart language and offered radio programs that build up the community and retain their culture.

The Church in Mission also confronts the need for ongoing care of workers. According to a World Evangelical Alliance study, many non-western missionaries return from the field before the end of their first term because they don’t have the care and financial backing needed to continue.

When MB Biblical Seminary, Fresno, Cal., released the original The Church in Mission in the 1960s, MB missionaries thought in terms of countries; today, MBs think much more of people groups.

India is a case in point: it has the largest MB conference in the world. “We can either rest easy because we already have a church of 200,000 in southern India,” says Wiens, “or we could open our eyes to the thousands of people groups in northern India unreached by the good news of Jesus.”

Changing times also bring opportunities. The Church in Mission celebrates the use of mass media – a new door into restricted access countries, especially in the Middle East and North Africa. Wiens reports a growing network of cell churches in areas where it is difficult to place missionaries. “Where hostility to the church is increasing, we are using mass media as much as we can by finding national partners compatible with our mission.”

ICOMB and MB Mission hope the book will “strengthen the mission capacity of the MB conferences” by “raising vision and providing tools for workers serving within and beyond their culture to plant churches that will transform communities,” says Wiens. They plan to translate the text into Portuguese, Spanish, French and Telugu.

The 45 chapters are grouped by historical, biblical, cultural and strategic perspectives. Some contain deep theological reflection, while others offer inspirational stories and basic tools for sharing one’s faith, to engage a broad range of readers.

The weight is on the practical – a reflection of the volume’s editor: “Though I have an academic background, I am more of a practitioner at heart, and I work for an agency that serves mission workers,” says Wiens. “The Church in Mission is not just for the library; we want it to be used on the ground.”

If there’s a chapter Wiens wishes he could have read before entering cross-cultural ministry, it’s “Equipping principles for spiritual warfare” by MB Mission general director Randy Friesen. While he was a long-term mission worker in Brazil, “we frequently built relationships with people who dabbled, or dove, into spiritism,” he says. “It’s really important for new workers to understand that mission is going into battle, not just in a demonic encounter sense, but as a battle with spiritual and cultural forces trying to bring down hearts, families, communities.”

Central in The Church in Mission is ICOMB and MB Mission’s “desire for our global community to understand that, before it’s an organization or institution, the church is a family,” says Wiens.

The articles about history are meant to help Mennonite Brethren “appreciate how many years it took to sow the seeds in certain fields, and only now, many decades later, are we seeing the harvest.”

“As we become aware of unchurched people groups, we need to remember that it may take time before we can reap a harvest,” says Wiens. “But we do need to sow.”

Valeu, meu irmao. May God use this work to better prepare the workers because the harvest is plentiful. And may we all be encouraged by the stories of the giants who have gone before.