On the streets of Corinth: Bible study puts readers in first-century sandals 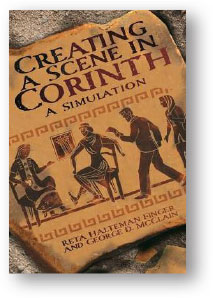 Creating a Scene in Corinth: A Simulation

Creating a Scene in Corinth is an exercise in biblical ‘improv’ – a dramatic re-creation of the congregation’s response to Paul’s letter to Corinth. It’s designed for discussion and debate within a small group or class setting.

Reta Halteman Finger and George D. McClain have created a significant resource for groups who want to seriously engage with Paul’s letter to Corinth in a personal and creative way. Reta Halteman Finger taught New Testament studies at Messiah College until her retirement in 2009. She is an advocate for the voice of women in the church and in biblical studies. George D. McClain served within the Methodist church in the area of social justice is an adjunct professor at New York Theological Seminary.

Creating a Scene gives ample room for imaginative interaction – a time-traveller’s perspective on Corinth, the setting and recipes for a Corinthian meal, and an opportunity to experience some of the aristocracy crowing about their achievements. The authors encourage us to play with the text – something that grates against treating the letters exclusively as sources of doctrine. The book is formatted for a group to move through 14 or 15 sessions (shorter variations are also included): understanding some of the social realities of Greco-Roman society in the first century, then working through hearing the letter issue by issue.

In trying to give the reader the tools to engage Paul’s letter to the Corinthians Finger and McClain emphasize some of the tensions among the Christians in Corinth. That emphasis sets the stage for lively discussion of Paul’s insights on the topics troubling the early church. Some may find the freedom to challenge and debate encouraged in the book somewhat unsettling.

The authors encourage the readers/actors to respond to the oral text of 1 Corinthians as if the church hadn’t yet solidified its authority as God’s revelation (as the original listeners did). At the outset, the authors review the social and religious context of the city of Corinth in the time of the New Testament, but they discuss relevant details of the context and potential emotional response of Paul’s audience as the letter unfolds.

The participants divide into four factions – those favouring Paul, Apollos, Peter, and the Christ group (1 Corinthians 1:12). A brief description of the background and nature of the groups gives the participants a sense of their role in the recreation. Finger and McClain then identify 19 characters (enhanced descriptions of people who lived in Corinth at the time), and give some background and personality sketch of each one. The characters represent a cross-section of Corinthian society: they include slaves and freeborn, widows and singles, and a number who have suffered deprivation and sexual abuse – much like typical society in that day.

The leader’s guide in the book and the online resources available at MennoMedia.org make the task of guiding this improvisation quite accessible. Finger, who published a guide to a congregational response to the book of Romans earlier, has come to this task with a clear understanding of what a group needs to know to engage the text. The discussion questions at the end of each session give a wide range of opportunities for discussion.

The theological perspective of the book emphasizes Christianity as a subversive force in the brutal Roman empire. The words of God come through the voices of the “dominated” – slaves and women have “a new confidence and sense of worth” to let their voice be heard.

The major sources of the background and interpretive possibilities given in the book are Bruce Winter, Richard Horsley, and Richard Hays. Special areas of study like the issue of slavery, the physical body, and Roman religions are well supported with references to key sources. There are plenty of pointers for those who wish to research topics further.

Both authors have a conversational style of writing that draws readers into the ideas of the book regardless of experience with biblical scholarship. For groups with a bent toward the dramatic, the character development and theological debate could be a lot of fun. There are a couple of instances in the book that are strictly aimed at an American audience, but on the whole the work is easily accessible beyond the U.S.